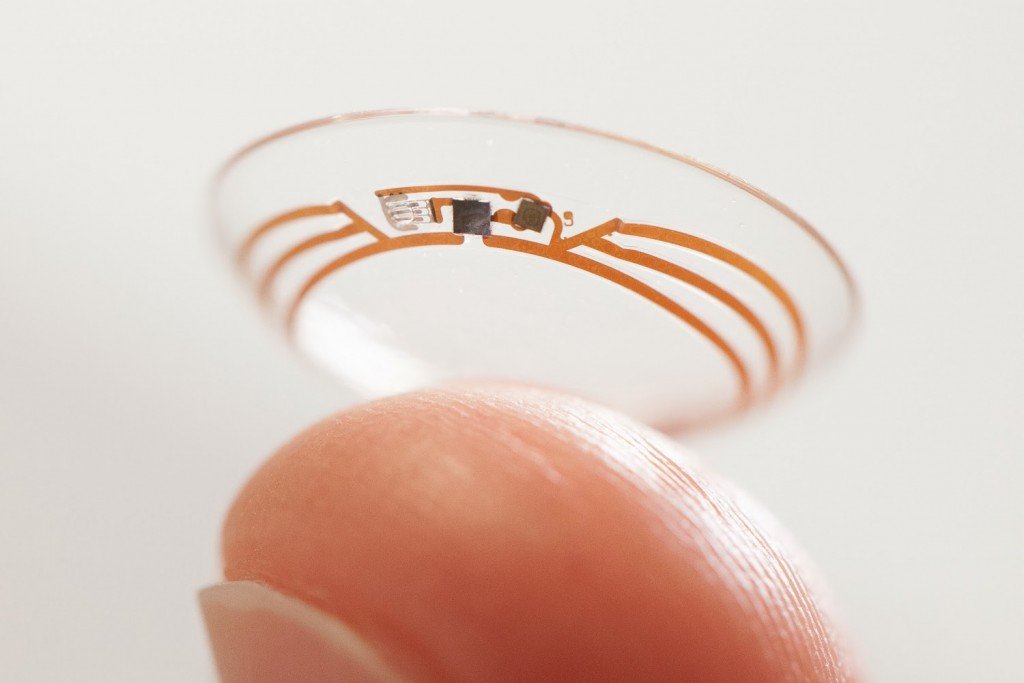 In 2014, it was announced by the Google X team that a smart contact lens had been developed. It is able to measure glucose levels in people who have diabetes through the use of miniature electronics. Things like sensors and incredibly thin antenna are built into the contact lens, which sits in the eye and tests the tears. In 2014 the Google X team was also planning to add tiny LED lights to the lenses, which would light up to notify the wearer of different levels of sugar found in the tears.

At the time Google said on its blog “We’re now testing a smart contact lens that’s built to measure glucose levels in tears using a tiny wireless chip and miniaturised glucose sensor that are embedded between two layers of soft contact lens material. We’re testing prototypes that can generate readings once per second”.

Google said that it was hoping to launch the smart contact lens after five years, which would have been 2019. However, patents have already been discovered which detail how Google may package the contact lens when it comes onto the market. The smart contact lens shown in the patents looks very similar to the lenses that were shown off by Google last year and they also measure the users glucose levels by analysing their tears. This means that the lenses may be closer

to a commercial release than was previously thought.

The contact lens is thought to currently be in the consumer research phase. Clinical research studies have already been conducted by Google, but a product of this type must undergo rigorous testing to make sure it is accurate and safe. The next phase is to begin testing the lens with the US Food and Drug Administration, which must test all medical products and medication thoroughly before they are able to be sold or used within the United States.

Google has been awarded 44 patents relating to the smart contact lens and is waiting for the results on another 53 which have been submitted. The patent application relating to the packaging of the lens describes an “eye-mountable” device that is held  on a ring at the top of a small pedestal so that it is elevated from a packaging container. Google has been hoping to work with technology experts as partners that could develop apps for the lens. These could give detailed glucose readings to the wearers as well as allowing the data to be shared with the doctor or hospital who usually looks after the diabetic patient.

In order to measure glucose levels in the body, diabetics usually need to prick their finger with a needle and then use a blood sugar reading machine to analyse a drop of blood. This method has been used for years, but it is not without problems relating to the use of needles and the way that the test must be performed. A smart contact lens would allow for passive monitoring of sugar levels in the body without the wearer needing to do anything, improving ease and quality of life for diabetics.

Google partnered with Novartis to create the lens, making a deal in which Novartis would hold the license for the technology. The company has used its Alcon division to help with development, which has particular experience in the visual performance of the eye. The lens has been designed to detect glucose levels, but it may also be able to detect levels of other chemicals in the body by using the tears of the eye. Google co-founder Sergey Brin has said “Our dream is to use the latest technology in the miniaturization of electronics to help improve the quality of life for millions of people”.

There have been few details released about how the lens works, but it is thought that tiny solar panels will use light to power the lens and send the data to an app on a smartphone. This will be evaluated during the testing phase of the technology, which will include clinical trials and consumer testing. While a predicted launch date of 2019 was announced over a year ago, it seems that things are progressing fast for the smart contact lens and we may see it being used much sooner than previously thought.