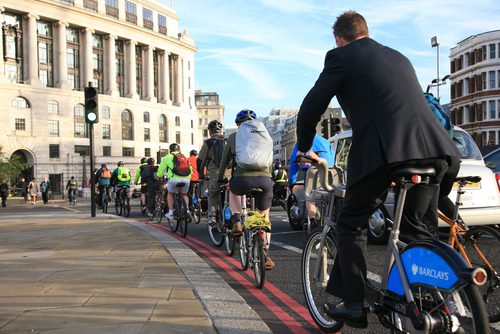 Traffic light technology set to be implemented in London will be able to control the flow of traffic to make sure cyclists are safe when it senses that they are close.

There have been six cyclist deaths after collision with lorries in the city this year alone and the new technology has been designed to allow cyclists to have more time. This should help to prevent more crashes and deaths.

Transport for London will see how well the technology works in order to consider introducing it in more locations in the city. Three trials will take place across the cycle superhighway where different junction  types will determine the suitability of the technology for the capital.

The data gained from the detection technology will enable TfL to affect signal timings in real time which will provide cyclists at junctions with the traffic light changes they need in order to be safe. TfL is hoping to improve the roads for cyclists and so the technology could be implemented across the city if the trials reach a good outcome.

Boris Johnson, Mayor of London, has said “London leads the way as we host world first trials of technology that has the potential to bring significant benefits to cyclists. With record numbers taking to two wheels, we are doing everything we can to make our roads more inviting places to be”.

Further technologies have been developed which are still in their prototype stage, but could be implemented in London or across the UK in the future. Forming part of the Connected Streets project, a London based company called Future Cities Catapult has devised five new ideas for improving the route choices and safety of cyclists. The technology uses the Internet of Things to add new functions into the cycling infrastructure that already exists in London.

The technology devised by Future Cities Catapult include a device that can suggest the cleanest routes for cyclists by measuring air quality while mounted to the handlebars of a bike, an attachment for bike sharing schemes that aims to rectify routes, and a visor that attaches to a helmet to provide cyclists with alternative directions. The visor would use a head-up display to provide safe directions to cyclists based on where they are by overlaying the information in real time, creating an augmented paths network.

The chief design officer at Future Cities Catapult has said “Cities are spending serious money, time and attention on improving the ‘hard infrastructure’ to make cycling safe, more convenient, more attractive”. Hill has said that a new soft infrastructure could be overlaid onto existing streets that will support cyclists further and help them to make the best choices.

The new technologies that are currently in development will use the IoT to improve themselves. For example, the pollution sensor would send real time data about air quality back to a network that would learn the air quality of the city in order to inform cyclists about the cleanest choices for new routes.
Another important area of development, especially given the fatalities caused by HGVs and lorries, is blind spot visualisation. In prototypes, proximity sensors, radar and sonar have been used to detect cyclists, but one of the best ideas may be to use laser projectors to sense a bus or lorry’s blind spots and then project them onto the road ahead of a cyclist’s route.

The safety of cyclists is an important issue in London and so testing new technology to improve the city’s cycle routes is high on the list of priorities for TfL for the future.